DR. SANJAY GUPTA, CNN CHIEF MEDICAL CORRESPONDENT:This year, more than 1.3 million women worldwide will hear the words that have breast cancer"-four words that will change their lives forever. That single moment will become a turning point, the start of a tenacious I battle against a killer. The day she heard those four words, Martina Navratilova cried. A woman who defected from Czechoslovakia at the age of 18, bravely blazed the trail for homosexual acceptance, a woman who many considered the best tennis player who ever lived, now braced for the fight of her life.Navratilova dominated the competition in the late '70s, '80s and early '90s. She won the Wimbledon singles title a record nine times. With 59 grand slam tennis titles, she has more titles. than any other man or woman. 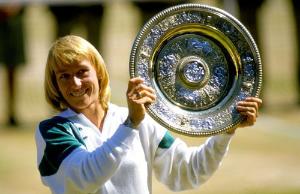 MARTONA NAVRATILOVA, TENNIS CHAMPION:Well, I had a mammogram in January and they said I need to come back for a closer look. In February, I went back and they magnified it. They said, "well, there's a cluster. Probably do a biopsy just to be sure." First I went to Denver to get the biopsy on a Tuesday and they said, "Ah, it looks pretty good. Should be nothing." Wednesday, my doctor Mindy, who is a very good friend of mine, calls me and says, "Are you sitting down?" And I'm like，"Uh, why?" She said, "Well, it came back positive."

DR. SANJAY GUPTA, CNN CHIEF MEDICAL CORRESPONDENT:Navratilova was struck with the most common type of non-invasive breast cancer. Intraductal cancer is also known as ductal carcinoma in situ, often referred to as DCIS for short. The word "carcinoma" means it begins in the skin or tissue, like breast tissue. This cancer starts inside the milk ducts. In Navratilova's case, the news is encouraging, because the cancer is isolated and had not spread to the surrounding tissue. But like more than a million women worldwide, the diagnosis came as a shock. She didn't feel sick at all. She was the picture of health and fitness. On March 15, Navratilova, surrounded by her support team traveled to the U.S. state of Colorado for the first stage of her treatment-a lumpectomy. A lumpectomy is a surgical procedure to remove the lump along with some of the tissue that surrounds the area. It's a breast preserving surgery, far less radical than a mastectomy in which a lot of breast tissue is removed. The surgery typically takes between 15 and 40 minutes, and scarring is minimal, but the lumpectomy is only one step on the journey to become cancer free. The next stage of Navratilova's treatment, radiation, will begin on May 12. Radiation therapy, also called radiotherapy, is a highly targeted, effective way to destroy microscopic tumors that may have escaped surgery. In Navratilova's case, she will receive radiation therapy four to five times a week for six weeks. One side effect of radiation therapy is exhaustion caused as the body works to repair damage to healthy cells. Typically fatigue occurs in the later weeks of treatment.

MARTINA NAVRATILOVA, TENNIS CHAMPION:My worst day by far of the six weeks was Friday of the fourth week, which was the day off. I think we played Thursday and then we played Saturday, and Friday I went to hit and I was so tired I lasted about 15 minutes. I had to stop. I had no energy. And I thought... and it gets worse, usually.

網球名將娜拉提洛娃：網球名將娜拉提洛掛在那6周當中，我最慘的一天是第4周的星期五，那天沒有比賽。我們周四和周六都有比賽，周五練了球，可是我覺得好累，撐了大概15分鐘。我得停下來，根本沒有體力。然后我想……通常情況還會更糟。
IWONKA KUCZYNSKA，COACH:She was in pain. She was very tired and I felt like she might pass out or something like this. I was very scared for her.
教練 伊汪卡·庫欽斯卡：她很痛苦。她非常疲憊，我以為她可能會昏倒或什么的。我為她感到很害怕。
MARTINA NAVRATILOVA, TENNIS CHAMPION:Yeah, it was nice to win. I played better at the second set. I was really tired in the first set-wasn't seeing the ball. Then I warmed up, so to speak, and played better, and Jana played well.
網球名將娜拉提洛娃：是啊，贏球的感覺很好。我在第二盤的表現比較好。我在第一盤真的很累，連球都看不到。后來我算是已經完成熱身運動，所以打得比較好。杰娜也打得很好。

DR. SANJAY GUPTA, CNN CHIEF MEDICAL CORRESPONDENT:Like all women who have been diagnosed with cancer, she will see her doctor regularly for follow-Ups to ensure there is no recurrence. She'll also have a mammogram every six months. June 16, the day Martina Navratilova had looked forward to for a while, the day of her last radiation treatment.

CNN首席醫學特派員 桑杰·古普塔博士：6月16日是娜拉提洛娃期待已久的日子，也就是她接受最后一次放射治療的日子。如同所有診斷出癌癥的女性，她也將定期復診追蹤，確保病癥沒有復發。她也會每6個月做一次乳房X光檢查。
MARTINA NAVRATILOVA, TENNIS CHAMPION:I think a lot of people still thought that I had... you know, there was still much more serious surgery and then chemo and all this and it was "just radiation," just radiation, so I really feel like I escaped, you know, the big C. It's a very scary word, but I learned a lot and, you know, I hope I don't have to go through something like that for a long time, but if it happens again, I'll be ready.
網球名將娜拉提洛娃：我想許多人仍以為我做了很多大手術和化療等等，但我做的“只是放射治療”，只是放射治療。所以，我真的覺得自己逃過癌癥的魔掌。癌是個很可怕的字眼，但我學到了很多，也希望再也不必經歷這樣的事。不過，如果再次復發，我也已經做好準備了。
來源:可可英語 http://www.eastdalealumni.com/Article/201410/335072.shtml
查看《一步步聽懂CNN名人專訪》更多內容>>
保存到QQ日志   登錄QQ空間
?